Over a hundred million years ago, a lumbering armour-plated creature decided to head back to the sea. Maybe life on land was just too dangerous. Or maybe the effort of hauling all that armour around on its sturdy legs was just too much. Or maybe there was tempting food to be had.  Our guest contributor, Georgina Jones, a highly-regarded marine naturalist and author, shares her extensive marine knowledge on turtles with our readers.

The evolution of turtles

Over time, the legs of its descendants flattened out to become efficient flippers. They developed the ability to hunt underwater and even to sleep there. They developed glands to get rid of excess salt in their systems. But they kept on breathing air. And they kept the armour plating. And so successful were they, that when Ferdinand Columbus arrived in the Caribbean with his soon-to-be famous father, the sea looked to him as though it was filled with little rocks. The little rocks were in fact green turtles, making their way to their ancestral nesting beaches. 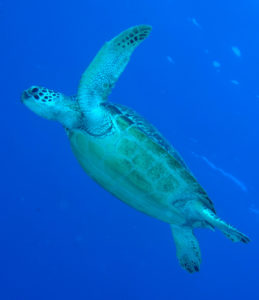 Four hundred or so years ago, there were hundreds of millions of turtles swimming the oceans. It’s hard to imagine now.  The change, of course came about as a result of human activities – turtles were much prized for their meat. Beach living people enjoyed meals of turtle eggs and would also hunt egg-laying females. Hawksbill turtles were caught for their attractive shells which were used to make jewellery, musical instruments and eyeglass frames. Olive ridley turtles, which nest on a chosen beach in spectacular fashion in ‘arribadas‘ were so numerous that it seemed inconceivable that any human egg or turtle gathering effort could make a difference. Unfortunately, it has.

The man-made perils for turtles

Not only are turtles threatened by direct hunting of themselves and their eggs, but their habit of eating jellyfish makes them vulnerable to plastic pollution. Plastic eaten in error can block their digestive systems so that they starve to death with stomachs stuffed full of plastic. They also get caught as bycatch by long liners, and in trawl nets. Baby turtles, just hatched, usually at night, face another problem. Their instinct is to head for the starlight reflecting off the sea, and then to swim for several days to get out to the mid-ocean where they can grow into adult turtles, but beach house lights confuse them and these babies can end up getting lost or eaten. Turtles typically take up to 35 years to mature sexually, so the impact of indiscriminate hunting is long lasting.

A little hope on the horizon 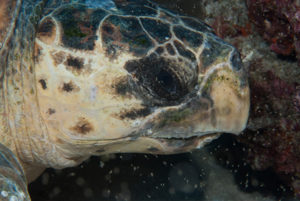 Things are changing though. Several known turtle nesting beaches have protection in place, some from as far back as the 1970s. Many fishing boats now have devices known as TEDs (turtle exclusion devices) installed on their nets. Some beach developments are careful to keep their lights off during turtle hatching season and people are slowly becoming more aware of the problem of plastic pollution in the oceans. Perhaps it is not too much to hope that we will see a steady increase in turtle populations – even if we never do get to see a sea filled with little rocks.

Acknowledgements to our author – Georgina Jones a marine naturalist.