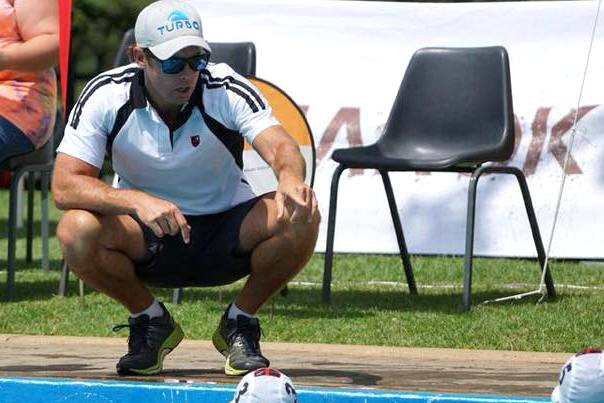 Life is full of moments when people, with all good intentions, give you some advice which they think will inspire you to change your life and become all you can be. Coaches are always telling their athletes to make the most of every training session and make the most of every opportunity, but some coaches have the magic! Paul Martin, Professional Water Polo Coach, Businessman (owner of Turbo SA) and the coach who brought back the gold from the EU Nations Cup with the SA Men’s Water polo team, displays coaching at its best. Water Polo Coaching at its Best with SA Water Polo Royalty. 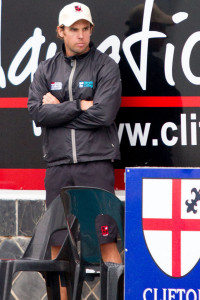 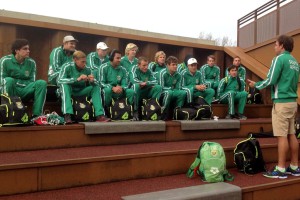 It’s no wonder he came back this year with GOLD!

We were not surprised to discover that whilst at Rondebosch Boys High School, Paul played for the school age group A Teams as well as represented WPSWP at u14A, u16A and u19A levels.  After school he continued to play club polo for a good few years as a goalie before deciding to focus on coaching as a career. This initially started in 2001 whilst he was doing his Post Matric, Sports Management Diploma at Kingswood College in Grahamstown.  Part of the course included having to coach various sporting codes.

“I got involved in coaching water polo whilst still playing at the school.  From this experience, I realised coaching was something I really enjoyed and on returning to CT in 2002 I applied to coach at Reddam House Prep School in Tokai.”

Paul Martin has dedicated his professional life to coaching and inspiring the hearts and minds of both men and ladies playing water polo. He has been equally involved in coaching and shaping the game for both genders.

“The first and most obvious difference is the much higher speed of the men’s game.” 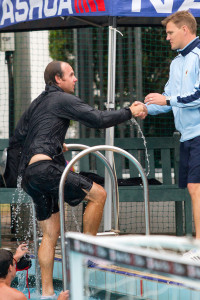 It is traditional for the winning team to throw their coach in the pool at the end of a tournament. Here Paul Martin is helped out the water by Duncan Woods (ex Springbok Mens Water Polo captain) and Coach of the Bishops 1st team.

He notes that there is no real difference in the coaching drills for men or ladies, although men are able to progress a faster due to being physically stronger.  Paul’s competitive coaching career began with coaching female water polo (Rustenburg Girls, Herschel Girls, WPSWP Girls u19A) where he succeeded to win with all these teams.

“There is a lot less talking at men’s practice…….. As far as ladies polo goes, I feel that as a coach you have a much bigger impact and role to play during the actual games.  At times the coach in the women’s game can have a direct impact on the way players react and execute things.”

“Obviously this can and often is changed during the game.  It is then up to the players to execute things in the water.”

When discussing the recent EU Nations Cup win we understood that the goal that Paul set at the beginning of the event with his team was to make sure they were in contention to play for a medal – regardless of the colour. They were fortunate to play two club sides as a build up to the tournament.  There were mixed fortunes as they beat one and lost to the other.

“The loss was a good thing for us as it let us focus on the errors we made.  I ensured that our focus going forward was on how we could constructively correct these issues. If one were to try find a turning point, this could be seen as the game vs the Czech Republic.  We lost to Denmark the evening before, however; we had 22 shots at goal and only scored 6.  During the Czech game we scored 15 goals and it was a case of creating the same opportunities as in the games before hand but we just started converting these opportunities.” 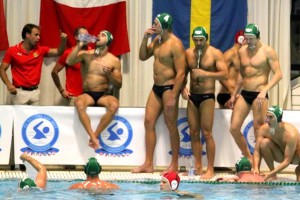 Having had direct involvement in the coaching of the SA Men’s Water Polo team since the FINA World Champs in Shanghai in 2011,  right up to the upcoming 2015 FINA World Championships in Kazan, Russia in July, it is clear that Paul has an educated opinion on the sport and brings a lot of issues to the fore with regards to water polo at this level.

Based on the fact that water polo is an amateur sport. which must contend with players based all over the country, the coaches have very little time to prepare before events.  For the EU Nations Cup, there was a general training camp in December which drew the majority of the team.  Training was left up to the players to do on an individual basis and with their local club teams.  Paul set up a water polo specific swim program for the squad to do for 9 weeks prior to the event which was expected to be done over and above their existing polo commitments.

“HUGE credit must go to each player for the amount of work they put in before the EU Nations Tournament.  All players were well conditioned, fit and strong. The only excuse we have as SA Water Polo players is that we do not get enough match practice at International level – there is no excuse not to be physically ready to compete at a big event.  “

Paul was confident that the strategies, game plan and most importantly mental state of the players were all put in place to the best of his ability during the event.  Sometimes he needed to change tactics or player combinations during matches. The team,as a whole (coach, assistant coach, manager and players), got their mental state and reactions to referee interpretation spot on.

At the EU Nations Cup, the goal that was set as a team was to identify mistakes and learn from them.  With this approach, they managed to turn the tough moments into positive outcomes.

“I would have to say that there was a period of time towards the end of the Final where we seemed to get ourselves on the wrong side of the referees’ calls.  Not much went our way and defensively we were put under huge pressure.”

The team however managed to manoeuvre themselves out of this tight spot, by keeping composed and supporting each other in and out of the water.  Players reactions to both the small things like stealing the ball from the opposition to the big moments like defending a man down situation were exemplary and showed immense passion and pride.

So where to from here for SA Water Polo?

This victory is huge for the current SA Men’s squad.  A lot of these players have given huge amounts of personal time as well as money to playing for their Country.  This win is so great and the thanks go to the players.  SA is now competing on the international stage, and by winning this event, have been invited back next year.  An invitation has also been extended to South Africa to compete annually in the u17 version of this Tournament.  Our SA Ladies Team will also be competing for the Ladies title in Ireland in May.

We hope that this will increase the profile of this already fast growing sport and more importantly help to secure some much needed sponsorship at all levels for the game of Water Polo in South Africa.

“Winning becomes a habit, the more you compete against opposition of your own level and slightly above you, you start to bridge the gap between yourselves and the professional Nations.  I have no doubt in the physical ability and skill level of the players that South Africa produces.  I would go as far as to say we are the best amateur Nation in the world.  The more we are exposed to International polo the better we will become. South African Water Polo is in a good place at junior levels.  The school water polo program in this country is fantastic.  Our next step is to filter this into the senior set up.  The addition of a National Club / Provincial League would be the first step to achieving this.  Sponsorship, investment and support once again comes into play here.”

Paul is currently the Water Polo Professional at Clifton College in Durban.  Here he coaches the school 1st Team as well as implements the coaching structures, assist age group coaches and offers as much guidance to players throughout the school polo program as possible.

When we asked Paul how he sees himself involved in shaping the future of water polo in South Africa his answer is sobering and mature.

“Things are all about baby steps and affecting what you can directly.  I believe strongly in emphasizing the basics of the game at all levels.  Along with my business partner in Cape Town, Grant Mackenzie, we run The Water Polo Academy.  This has been done to facilitate group training for kids wanting additional water time.  Groups are run on an age group/strength basis and boys and girls train together if strengths allow it.  At present we have over 200 members between the CT and Durban branches.”

“At all levels, players need to understand their role/responsibility in the team.  If this is not established, there will be miscommunication between the player and the coach.  Ensure that the team understands the tactics and any technical importance before the game starts.

In dealing with the best players in your country, a big part of the coaching job comes down to managing the players’ mind-sets before and during the game rather than telling them what they have done right or wrong.”