Wildlife photographer of the year 2017 finalists

The Wildlife photographer of the Year competition has been hosted by the Natural History Museum, London for the past 52 years. They have just released a shortlist of 2017 finalists. Amanzi peeks at the spell-binding underwater images in the finals and finds out what makes a winning photo. 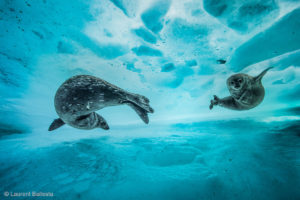 Laurent is one of the finalists in the Wildlife Photographer of the Year competition. Ballesta is a renowned marine scientist, underwater photographer and pioneer deep diver. He captured the curious gaze of a seal pup with the arc of its body mirroring that of its watchful mother. The image was taken in early Spring in Antarctica. The world’s most southerly breeding mammal, a Weddell seal, was introducing her pup to the icy waters – just a week or two after birth. “They looked so at ease, whereas I felt so inappropriate,’”says Ballesta. 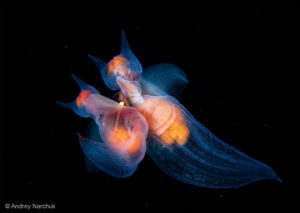 Andrey is an acclaimed Russian photographer who has won a host national and international photographic competitions. While on an expedition in the Sea of Okhotsk in Russia he was intending to photograph salmon. As he jumped into the water he was surrounded by the enchanting site of mating sea angels. He battled against currents and had to avoid a wall of gill netting to photograph them. His equipment became snared and he was forced to make an emergency ascent. But not before he got his shot. The following day there wasn’t a single angel in sight. 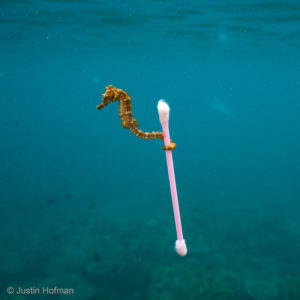 Justin is a photographer and illustrator working to share his knowledge and passion for the natural world. He was a finalist in the Save our Sea’s photography grant 2016. He is from the United States, but leads a planktonic lifestyle, always moving, exploring and observing.

As his travels extend further abroad, he is more interested in conservation photography than ever before. Hofman shot this incredible image near the surface on a reef near Sumbawa Island, Indonesia. Seahorses hitch rides on the currents by grabbing floating objects with their delicate prehensile tails. He watched in awe as this tiny creature ‘hopped’ from one bit of debris to the next. As a brisk wind picked up, making conditions bumpier, the seahorse took advantage of something that offered a more stable raft – a waterlogged plastic cotton bud.

Indonesia is known for having the broadest selection of marine biodiversity in the world. But the country is also second only to China in its contribution to marine plastic – fuelling the growing concern that unnatural ocean waste could outweigh fish by 2050. 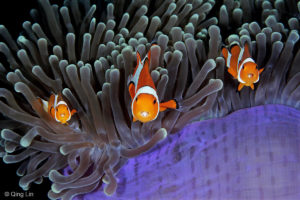 Qing Lin is a ‘moonlighting’ photographer and owns his own IT company by day. He produced “Dream Weavers” a documentary featured in the Oscars Best Foreign Film in 2008. He was appointed as the official film photographer for the 2008 Beijing Olympics.

Lin was diving in the Lembeh Strait in Indonesia, and noticed something strange about this cohabiting group of anemone fish. Each had an extra pair of eyes inside its mouth – those of a parasitic isopod.

An isopod enters a fish as a larva, via its gills, moves to the fish’s mouth and attaches its legs to the base of the tongue. As the parasite sucks its host’s blood, the tongue withers, leaving the isopod attached, where it may remain for several years.

What makes a winning photo?

Roz Kidman-Cox founded this competition and has been a judge on the panel for 32 years. She has authored 50 years of Wildlife Photographer of the Year – a book on how the genre became and art form. The judges observe the following 5 elements when rating a winning photo: 1) innovation & originality, 2) evoking magic, 3) knowing your setting, 4) seeing beyond the expected and 5) telling new stories.

‘Sometimes a picture is obviously innovative. Other times it has a quiet appeal – and it’s the little things, not the obvious ones that make it work. But a winning picture is always original.’ says Kidman-Cox.

With acknowledgement to Dive Magazine for the original article